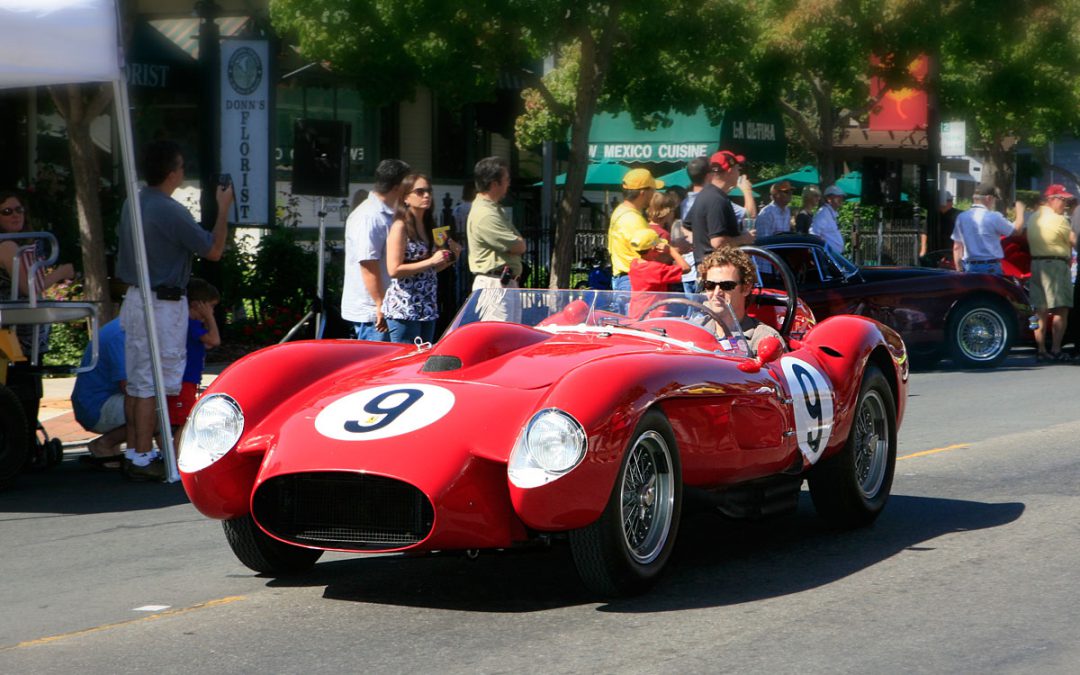 Having been launched into a tree at Laguna Seca by a previous owner, this particular Ferrari 250 TR (Testa Rossa) was “compromised” in the then limited collector world. Acquired in 1964 by San Rafael’s David Love, 1958 chassis No. 0754 continued as Ferrari had intended – it remained an active competitor! For some 50 years, this once shunned and now priceless Ferrari was expertly driven by Love. That doesn’t mean it wasn’t driven hard!

In an interview in 2009, Love said, “It’s more of a time machine than a racing car. When you’re in one of these things it’s doing what it did when it was new with all the flaws as well.” Chassis 0754 was one of the last Ferrari race cars to use drum brakes, and Love kept it that way. (Disc brakes were introduced the following year.) But the engine… what an engine! The sound of the 3.0-liter V-12 when it roars to life can take your breath away. Fed by six Weber carburetors, the Ferrari generates 290 horsepower pushing less than 1,900 pounds unladen.

Love was wise enough to save the original block which had been made unusable through wear and improper machining in rebuilds by previous owners. With time, welding and metal curing technology progressed to the point where the original block could be returned to factory spec and durability. This particular 250 TR is back to “matching numbers” condition, restoring its appeal to collectors.

While the car has stayed the same, the driver hasn’t. Around 23 years ago Love was diagnosed with Parkinson’s disease. Life off the track can sometimes be compromised, but that doesn’t carry over to his racing.

“That’s the curious thing about it. I’ve talked to Sam Posey about it and he has Parkinson’s and we’ve both come to the same conclusion: when you get in a racing car that’s where you feel the most normal.

“Adrenaline is a brain chemical like dopamine, which the lack of is Parkinson’s Disease,” Love said. “It seems to me that the adrenaline that this particular activity generates seems to compensate somewhat for the lack of dopamine. I’ve noticed over the years that after I’ve finished a weekend and I go back into the real world everything works better.”

His neurologist of 23 years agrees, even to the point of validating his racing appetite. Love couldn’t ask for more.

“Who else gets to race under doctor’s orders?”